Note that in this setup, the actual connection between user and application for the visualization data does not go through the web frontend. Instead, the web frontend only provides the user with a link which points to the properly forwarded port on one of the gateway nodes. The actual remote visualization software (for most applications we use Xpra) runs as part of the job. This means that the load on the web frontend can be expected to be very light, as the web frontend and middleware merely manage jobs. The following image illustrates the bwVisu architecture in more detail: 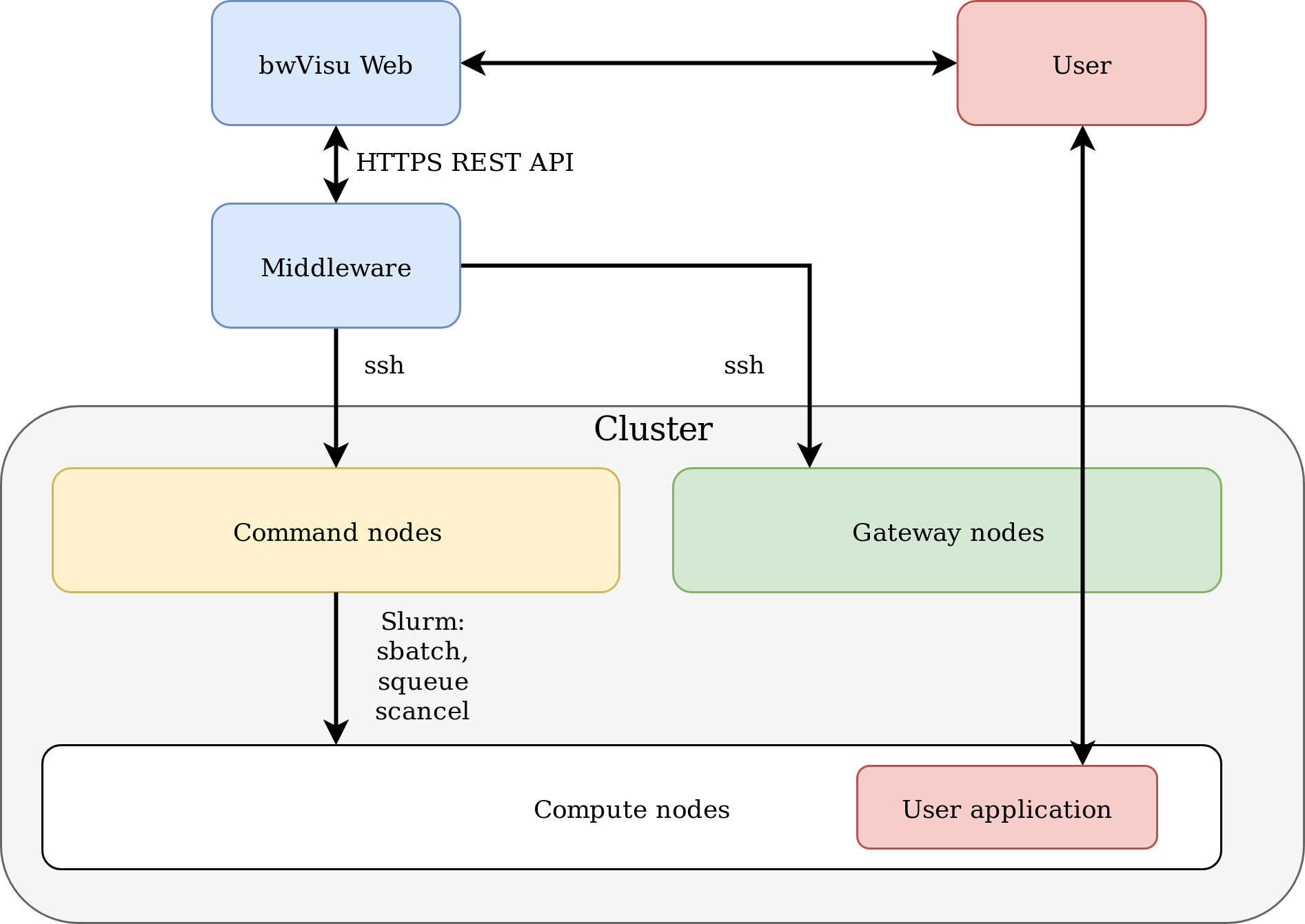 A web-interface and control plane. See here for more information on the bwVisu webfrontend.

A custom middleware provides an interface for the web frontend to manage jobs. The middleware, called bwVisu runner is written in python and exposes its features via a flask-based HTTP REST API to the web frontend.

The middleware is designed to be minimally invasive and can be deployed either on nodes of the backend cluster or on an external system. For job management, the middleware communicates via ssh with a set of command nodes, where it starts, stops and monitors jobs with the Slurm commands sbatch, squeue, scancel. If a command node cannot be reached (e.g. because the host is down), the middleware will attempt to use another command node.

Additionally, the middleware uses ssh to access a set of gateway nodes where it establishes iptables forwarding rules of network traffic from ports of the gateway node to the individual compute nodes where the user application runs. This allows the user to connect to his job simply by connecting to a specific network port on one of the gateway nodes. This is necessary because the compute nodes of an HPC cluster are typically not directly available from the internet. Authentication of users connecting to a port is handled by the user application (e.g. Xpra). In order to scale to many concurrent jobs, the middleware automatically distributes the port forwarding assignments (and hence, network load) of the jobs across the available gateway nodes.

The state of jobs is continuously monitored from the gateway nodes. This allows the middleware to provide information to the web frontend whether the job is ready to interact with the user, or whether the user still has to wait before the job can be accessed (e.g., because it is queued and not yet running, or because it is running but still in an initial start-up phase where network connections are not yet accepted).

The requirements that the bwVisu middleware imposes on the cluster are designed to be as low as possible: The middleware must be granted ssh access to a dedicated user account, and this account must be able to run Slurm commands on the command nodes and iptables on the gateway nodes (details here). Since the installation of the bwVisu middleware is the only requirement to use a given HPC cluster for bwVisu, extending an existing HPC cluster with bwVisu’s remote visualization capabilities is easy and does not necessitate any changes to the existing cluster configuration.

The middleware consists of four parts:

Jobs are started by substituting variables in batch script templates with values provided by the web frontend and submitting the batch script to Slurm. Also embedded in the batch script is the keyhole client, which will be executed once the batch script runs. It will then request port forwarding from the middleware to its host. The process of launching a job is quite complex; you can find a detailed walkthrough here.

The bwVisu backend cluster can in principle be any regular HPC cluster. bwVisu has been designed to be minimally invasive and imposes very few requirements on the cluster. See here for a detailed description on how to tell the middleware how to talk to an existing cluster, and which prerequisites must be met.

Applications provided by bwVisu are usually containerized Singularity images. There are only few restrictions on the images used in bwVisu. For more information see here.

Place your images in your image directory. Modify the contents of the templates inside the bwVisu runner (job script templates) with the path to your application images. Make sure that the image containing the modified Xorg (bwvisu_xorg.sif) is inside that directory. Update the content of your app bundles with the new application. More information can be found here.

You need to prepare the various components of bwVisu:

Make sure that the backend cluster meets all requirements as described here.

You can find instructions on how to configure a virtual machine running the middleware in the middleware (bwvisu-runner) repository in deployment/provision-middleware.py.